The Apocalypse is the limit of signification. For the western mind there can be no beyond it, no possible emotional commitment can be found in anything but the twin Janus faces of the apocalypse: revelation or destruction; the one looking ahead, the other drowning all possible futures in the abyss. Ours is a culture that has sketched his on fate in images inherited, it may be that, anthropologically or historically speaking, change is seldom practicable or allowed. But in our case it has to be attempted.

I wrote these words a number of years ago. I had just finished the first half of the oratorio, and my apocalyptic stamina was at an all-time high. It was only the other day, reading Helmut Wilhelm’s thoughts on the I Ching, the Chinese “Book of Changes”, that I found a satisfactory confirmation of an old suspicion I had: it does not have to be that way, cultures are not necessarily tragic in essence. Wilhelm says that, apparently, the Indians and early Greeks may have conceived the created world as “static, at rest, lasting”. And he continues, “the forces breaking into it, changing its lastingness into motion, creating the new, and pointing the way to constant renewal were expressed as myths, and these have in their very nature something that is shattering, repugnant to order, and consequently inherently tragic.”

Wise words. There is not one simple unified way of structuring the human experience at an spiritual level. Only, sometimes, you have to find the right words to make that fact stick in your mind. To give experiential meaning to it, that is, allow it to work in you and change you. 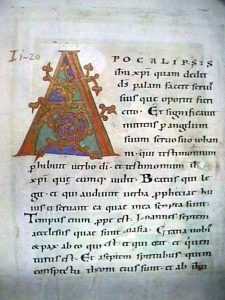 Our fate, the fate of the “West”, may be written in the imagery of the apocalypse. For all we have done, and out of all endeavors, the ultimate fate seems to squeeze pass all barriers and finally draw on our efforts the crimson curtains, those signaling the final act of many cultures. In some sense, it just may be that there is no possible commitment anymore to the stressed-out western culture. It may even be there is no operative western culture as such, or even the will that there may be. No more prophets needed, no more art required. Like Wilhelm says these are “formulations of primordial images (archetypes), which, once joined to consciousness, lose their effectiveness only with the disorganization of consciousness.” (italics mine). The book I refer to is Wilhelm’s Heaven, Earth, and Man in the Book of Changes.

Let me recap the previous paragraph. When I first began writing this post, some years ago before the long and winding break that became my life until now, these thoughts were truly moody and fully apocalyptic. They were cued by the readings of Spengler, Gibbon, and others: men of greater stature, looming high above me. Now, after the full bloom of globalism begins to show small cracks here and there, things are not so simple. And I am not so moody that much anymore. The Fall of the West, its decline, are biblical categories that sit beyond time as experienced by western individuals as such. They are “timeless” in the sense that they can be applied to or experienced by other modalities of human existence. They are, too, peculiar to the West in the sense that we have made a lot of it. For one reason or another we, westerners, have adopted these apocalyptic categories (or maybe they – read as “it” – have adopted us).

The experiential occurrence we westerners call life crystallizes (Spengler looming again) following the paths contained in the apocalyptic blueprint; that is the hypothesis and what the title of the article is about. Other peoples call life a number of other things, and are also surely determined by them as much as we are by ours. No, there is not one type of humanity only. We are on race, but the “complementarity” of it, the different modalities that make up the whole, the being part of the human race as a community with a specific identity, is what truly defines us. Maybe it is time to modulate the politics of blinding the foolish Gloucester weaknesses of our past and hanging the truthful Cordelia, our past and only future.

I am a man of the west, or so I think. I understand the attractive glamour of destruction but despise it means, refuse its object. I understand it as the ultimate object of art, in all its awesomeness. What is certainly not is a motive to parade onto Armageddon.

We are all held hostage by a titanic power whose roots and reach go beyond even our finest understanding. We are victims causing other victims. Perpetrators being led by a sinister hand that no conspiracy, unless truly mythical or Dantesque, can match.